Much to GE investors’ chagrin, current future cash flow models state that the stock is fairly priced at the $7 mark:

If the stock drops another couple of dollars, however, it is then officially in penny stock territory. And then it drops off many investors’ watch lists (including mine).

I wanted to check this evaluation with my own discounted cash flow ((DCF)) model. My model emphasizes the annual trend of the DCF valuation rather than the point value and is thus useful for understanding the drift of the underlying financials of the company over a longer time horizon. Let’s start with some of the important metrics used in this model.

Free cash flows are rather chaotic: 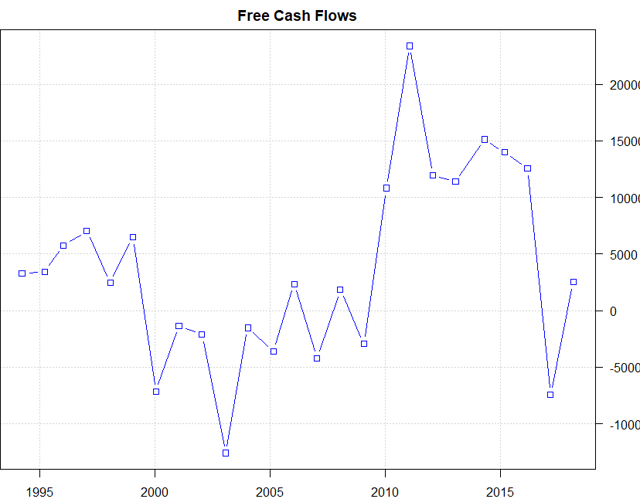 The trend becomes clear when you take a rolling average: 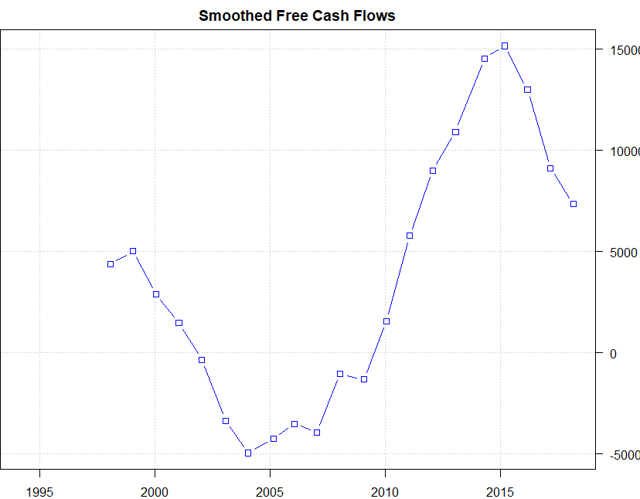 Free cash flows have been on the decline since 2015. If this continues over 2019, GE could easily run out of cash and find itself unable to pay down debt to continue its trend of sinking debt-to-equity:

If the company is experiencing growth, however, debt becomes less of an issue. However, this is not the case. Cash returned on invested capital has been hovering around zero: 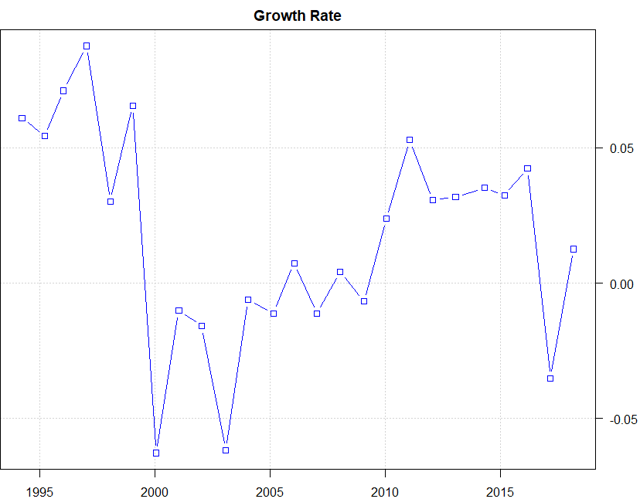 When smoothing this metric with a rolling average, we see a trend similar to that of cash flows: 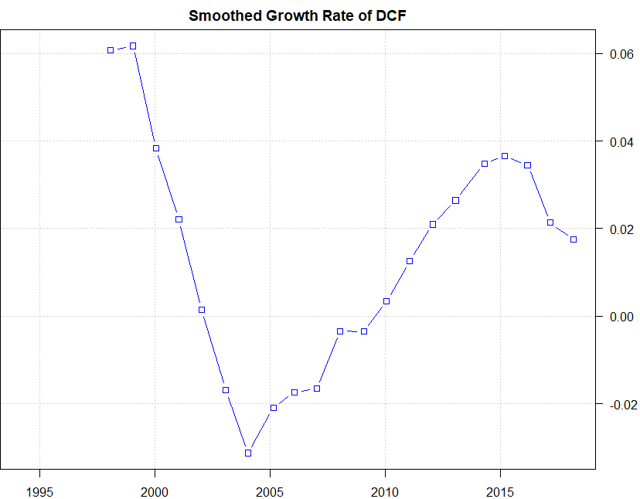 My model has given a valuation that has front-run the price of the stock consistently: 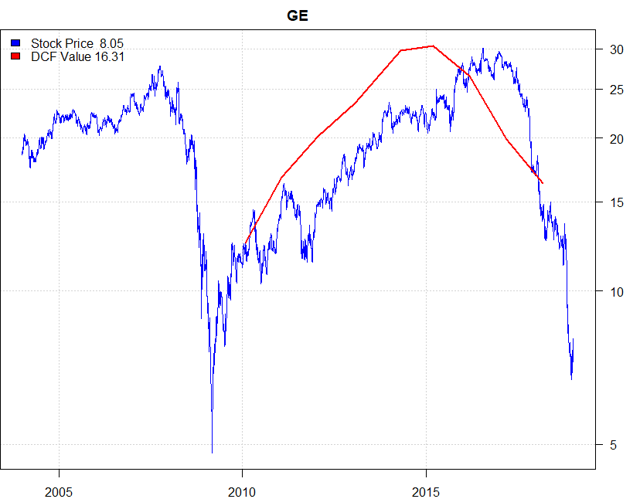 It flashed a sell signal in 2016, right before the stock crashed. I will be able to update this model in March with annual data. For now, just note that the valuation’s trend has not slowed to where a reversal is likely; if this continues, we should see a sub-$5 valuation in 2019.

The company is clearly having hard times. At the same time, it claims to be reinventing its business. For now, few results of such reinvention are palpable; for the most part, “reinvention” seems to be a euphemism for “Don’t sell just yet!” directed at investors.

All companies eventually die. As companies age, they become more convoluted and stuck in their ways. Note that GE was born in 1892, which is impressive but not a reason to put your faith in this stock.

Many are displeased with the new CEO, as the stock has sunk since his arrival. But GE investors seem to forget that the last CEO wasn’t a rock star either; his retirement announcement boosted the stock price. No, this company has problems unrelated to who’s sitting on the CEO throne – problems perhaps unfixable, even with a strong leader.

GE’s capital allocation has not paid off. Its recent acquisitions have been some of its most expensive (e.g., Alstrom, the French turbine company – and former GE competitor) yet they have been unable to bring GE back to its glory years.

GE has also been aggressively engaging in buybacks. Buybacks make sense when you have excess capital, wish to reduce outstanding shares, and want to bolster the stock price – and only when the stock is objectively cheap. However, we find GE spending most of its $90B buyback budget near the recent peak.

I like my chart better because it does not put rose-colored glasses on investors due to it not including highly optimistic analyst estimates: 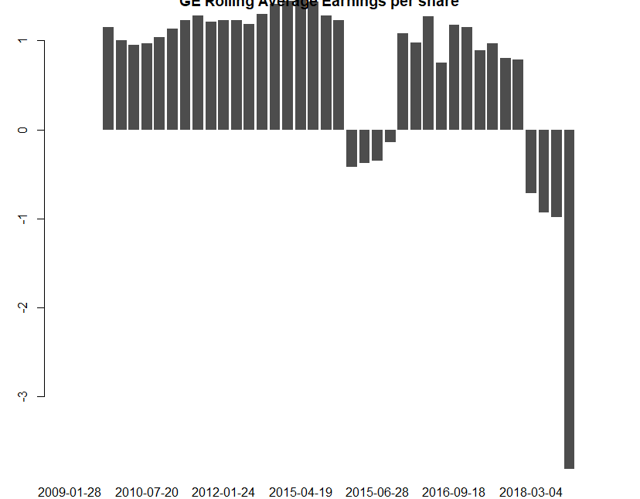 Perhaps Larry Culp should take a note from George Costanza and set a goal of -$2 EPS for 2019. He might end up making some profitable acquisitions. Or perhaps GE is beyond saving at this point.

On a more serious note, notice that the analyst range of EPS estimates have historically been above the actual EPS. For this reason, GE’s earnings reports have been statistically reliable short trades. The reason for my interest in trading GE this quarterly earnings lies in its quarter-to-quarter EPS trend.

Analysts’ consensus for EPS in the coming earnings report is $0.18. This is highly unlikely. Consider the following.

GE’s post-earnings movement should be easy to predict, as statistically it falls into the group of stocks that react strongly to EPS movements. If you’ve been in Exposing Earnings long enough, you know that about half of the stock market moves after earnings because of EPS; the other half is uncorrelated – and this is not a quarter-to-quarter phenomenon but related to individual companies. GE is easier to predict than most because the stock price is highly correlated to EPS: 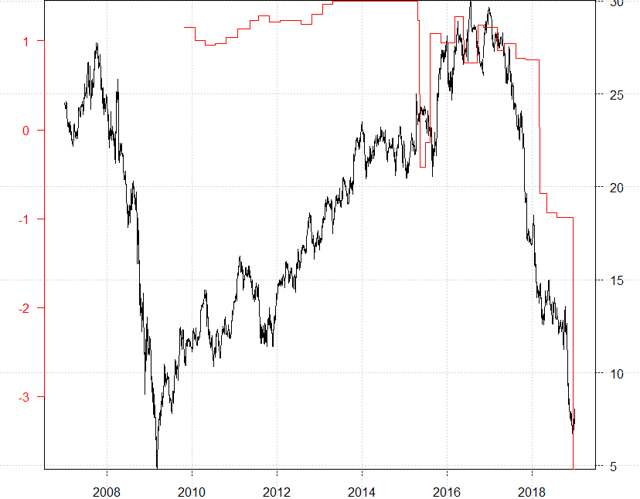 When the company was doing well, this stock was seen as a defensive holding. In 2018, GE finds itself delisted from the DOW. The next step is its graduation to a penny stock: The EPS line is gently pointing to where GE needs to park itself.

I asked my machine learning algorithm if it agrees with the penny stock valuation. It said GE will likely drop another 6.6% from here, which is not penny stock territory. So in fact, this robot of mine is less bearish than I – and more subjective – however, it only cares about historical patterns and has none of the information I presented above: 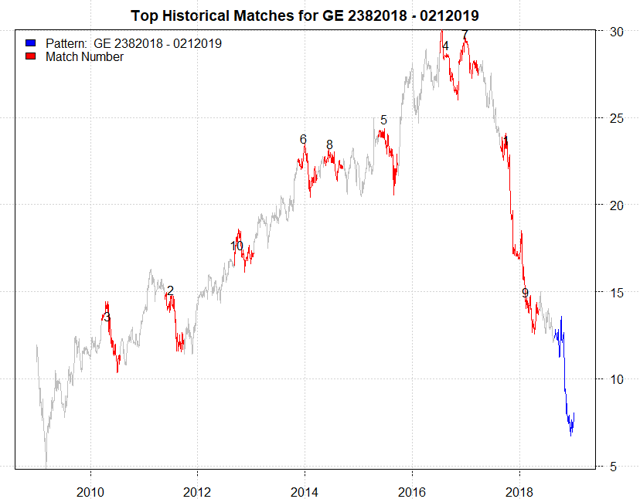 I’ll spare you the other quant results, most of which support a bearish earnings trade, and give you a summary instead. Here’s my quick take on this play:

At the current prices for these options, this play is opened at zero cost. Should GE’s CEO release an amazing turnaround plan and report an EPS surprise, GE could rally, but we would lose nothing. I doubt a rally will happen, but we should always be prepared with a contingency plan, such as the above options strategy.

Probabilities are Bayesian and weight historic earnings patterns along with AI pattern recognition.

Risk/reward measured without respect to probability and weights upside/downside.

Warning: Most earnings trades produce a gap. Determining when to close your position upon seeing the gap is imperative. Review my gaps guide.

Disclosure: I/we have no positions in any stocks mentioned, and no plans to initiate any positions within the next 72 hours. I wrote this article myself, and it expresses my own opinions. I am not receiving compensation for it (other than from Seeking Alpha). I have no business relationship with any company whose stock is mentioned in this article.